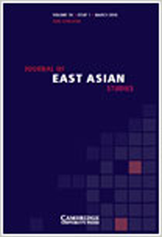 Journal of East Asian Studies
JEAS is devoted to publishing cutting edge social science on East and Southeast Asia.
The journal is interested in work that combines theory, novel empirical contributions and engagement with the major substantive issues facing the region. The JEAS publishes primarily in the fields of international relations, including both international political economy and security studies, and comparative politics. However, we welcome interdisciplinary work and contributions from sociology, applied economics and business studies as well. The journal is also open to roundtables on important new books on the region, review essays and shorter research notes.
SSCI indexed, the journal prides itself on a strong peer-review process.For more information on submissions and subscriptions, visit the website at Cambridge University Press. 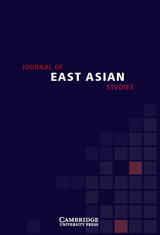 An Introduction to the Journal of East Asian Studies 20.2

The current issue of the Journal of East Asian Studies leads with an outstanding book symposium that addresses the core issue in international politics at the moment: how to theorize China’s rise. Guest edited by Joshua Shifrinson, the roundtable takes four recent books by IR theorists working on power transitions. However, these scholars are not Asianists; their work draws largely on European examples, with exploratory references to the current Chinese case. Dave Kang, Robert Ross and Ketian Zhang—well-known regionalists--offer their views of this new work, and the authors—Stacie Goddard, Paul McDonald and Joseph Parent, Kori Schake and Josh Shifrinson respond. This is an important engagement between IR theory and those who work on the region, and should contribute to the debate on China’s rise.

The rest of the volume provides our usual mix of international relations scholarship and work in comparative politics, much of it particularly topical. Paul Kenny and Ronald Holmes dissect democratic backsliding in the Philippines, using the case as an example of what they call the new “penal populism”: the belief that criminal and anti-social activity should be harshly punished. Since coming to power in 2016, President Rodrigo Duterte has waged a violent and highly popular campaign against drug-related criminality. Surveys by Kenny and Holm show that support for harsh treatment of drug users and belief in Duterte’s charisma are in fact closely related, raising issues about the changing nature of populism and a particular route to democratic decay.

Mathew Wong takes us to Hong Kong. Recent conflicts in the city have naturally focused attention on the cleavage between supporters of the mainland and those favoring a more democratic Hong Kong under the one-country, two-systems formula. Based on a new dataset on the ideological positions of political parties in Hong Kong, Wong shows that there is an identifiable left–right spectrum in the city as well. Wong’s work extends the manifesto coding project to a competitive authoritarian setting, and raises the question of how these different cleavages—around democracy and economic circumstance—will intersect.

Tao Li makes a contribution by generating new data as well, estimating the vote counts of the secret elections held by the National Congress of the Chinese Communist Party from 1945 to 2017. The results confirm that a new political era has in fact dawned: both the number of dissenting votes and the voter preference diversity index plummeted by 2017. Applying the same method to provincial party congress elections from 2006–2017, the paper finds that provincial dissenting votes also declined around the same time, though the magnitude is relatively smaller and there is a wide range of provincial variations. Will the provinces hold out or are they destined to follow the same path?

Steve Pickering, Seiki Tanaka and Kyohei Yamada offer a methodologically interesting paper that uses remote sensing data to assess the impact of municipal mergers in Japan. They demonstrate that when rural and sparsely populated municipalities merge with more urban and densely populated municipalities, patterns of spending shift, and in some cases quite dramatically. Electoral boundaries have important effects on the provision of public goods.

As incomes in the advanced industrial states stagnate and inequality increases, we should be paying more attention to the politics of labor. Byunghwan Son looks at the conditions under which publics trust unions drawing on data from the Korean case. Those who are in general less trusting are more likely to view unions as rent-seeking organizations advancing their interests at the expense of the rest of society. The faith in unions among those who are more trusting, however, depends on whether unions are already represented by government; where they are, the Korean public tends to view them with greater suspicion.

Finally, Taisuke Fujita and Hiroki Kusano offer a nuanced qualitative design for explaining the timing of Japanese leaders visits to the controversial Yasukuni Shrine. Taking a necessary-conditions approach, they demonstrate the circumstances when such visits are more likely: under a conservative ruling party, and when that government is popular, but also when the government perceives a significant Chinese threat. Fukita and Kusano thus integrate the visits with a broader signaling approach to Japan’s foreign policy while also demonstrating the value of well-crafted qualitative analysis.

A New Penal Populism? Rodrigo Duterte, Public Opinion, and the War on Drugs in the Philippines
Party Competition and Ideology in Hong Kong: A New Manifesto Coding Dataset
The Impact of Municipal Mergers on Local Public Spending: Evidence from Remote-Sensing Data
Declining Legislative Dissent in China: Evidence from National and Provincial Party Congress Elections
Interpersonal Trust and Confidence in Labor Unions: the Case of South Korea
Denial of History? Yasukuni Visits as Signaling

The Journal of East Asian Studies invites original contributions that meet the journal's aims and scope.
Manuscripts may be in the form of articles (approximately 10,000 words), review essays or commentaries (3,000 words), or book reviews (1,000 words).

Manuscripts for articles, review essays, and research notes should be submitted electronically, via the JEAS ScholarOne site.
To submit an article, please visit https://mc.manuscriptcentral.com/joeas.