Public support is crucial for the vitality and stability of democracy. A low level of public support weakens the legitimacy of a regime in a normative sense and hinders the effective operation of governance in practice. Public support is even more important in new democracies, in which democratic norms and principles have not been firmly established in society and legacies from previous authoritarian regimes sustain. There are increasing concerns about waning public support for democracy in both developed and newly democratized countries. South Korea is not an exception. Based on the analysis of the survey data from 1996 to 2006, for instance, Park (2011) concluded that “the public evaluation of democracy in practice has been largely negative, while the public acceptance of democracy as an idea has been mixed”. In this paper, we examine how public attitudes toward democracy in South Korea have changed since the mid-2000s. 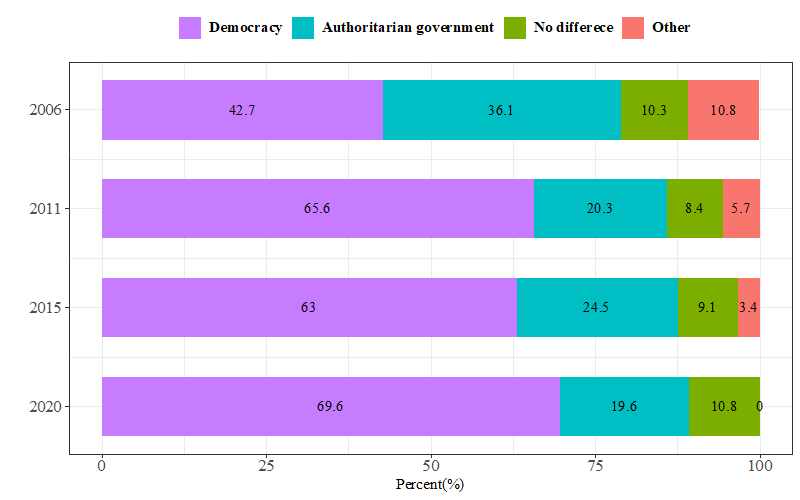 To examine the public evaluation of democratic performance, we rely on the question that asks how many respondents are proud of maturity of South Korean democracy. In Figure 2, we can also see that satisfaction with democratic performance also significantly increased during the same period. Those who choose positive responses combining ‘to a great extent’ and ‘somewhat’ increased from 43% in 2005 to 50% in 2010, 52% in 2015 and 74% in 2020. In contrast, negative responses combining ‘very little’ and ‘not at all’ declined from 57% in 2005 to 50% in 2010, 48% in 2015 and 26% in 2020. 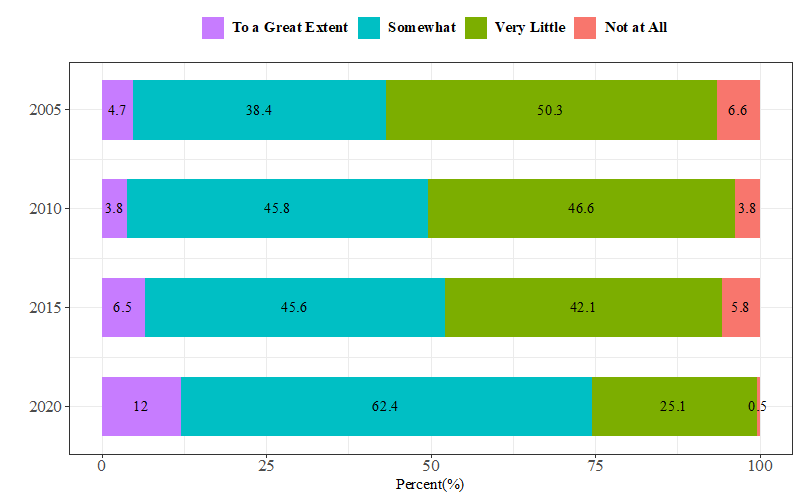 Overall, South Korean attitudes toward democracy have become more positive in all three aspects of regime evaluation. One possible explanation for such a high level of support in 2020 would be successful responses to the COVID-19 outbreak by the South Korean government. We can see that public satisfaction increased to a greater extent in the evaluation of regime performance between 2015 and 2020, which is similar to patterns for public confidence in the national government that is in charge of addressing the COVID-19. Yet, the earlier trend indicates that this is not the whole story. In terms of support for democratic principles, for example, it was between 2006 and 2010 when support for democracy increased the most. The change between 2015 and 2020 is somewhat qualified. Similarly, we can see that confidence in president has been increasing since 2011. In other words, all three indicators suggest that public support for democracy has started recovering since the mid-2000s. 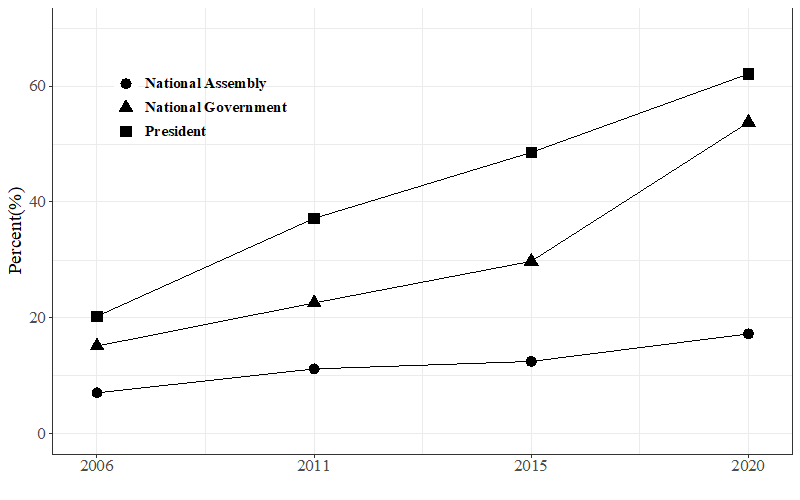 In the 2020 Korean Identity Survey, about 70% of the respondents prefer democracy to the authoritarian government, 74% approve the maturity of Korean democracy, and 62% answer that they have confidence in president. It is noteworthy that support for democratic performance improves even among conservative party supporters, in contrast with the general perception that the electoral defeat degrades support for democratic performance among supporters of the opposition party. Compared with the low to moderate support for democracy reported in the early 2000s, the high level of support for democracy in all aspects of consideration is an indication that democracy in South Korea is in a better shape as the only game in town. Yet, we need to keep in mind that the survey was implemented during the period when the COVID-19 was effectively contained. In this respect, it is questionable whether the public would continue to provide the high level of support for democracy, particularly in terms of the evaluation of regime performance when the pandemic is over and politics return to normal.

■ This brief is an abridged version of the paper, “Identity and Support for Democracy in South Korea”, presented at the Conference on the 2020 Korean Identity Survey held on July 6, 2020 at the Korean National Assembly Hall.

■ Woo Chang Kang is an Assistant Professor in the Department of Political Science and International Relations at Korea University. His research interests are in political behavior and quantitative political analysis, with particular attention to Korea and the United States. He received his Ph.D. in politics at New York University, and previously taught at the Australian National University.