Koreans’ attitude towards multiculturalism and immigration has changed over the last 15 years, reflecting a nuanced perspective in which people acknowledge both threats and opportunities associated with multiculturalism. In this issue briefing, Dr. Rosa Minhyo Cho presents findings from the South Korean Identity Survey (SKIS: 2005-2020) and points out that while Koreans exhibited a form of paternalism at the initial stage, this attitude has changed in recent years with problems linked to the presence of immigrants in society. As the Korean society is increasingly faced with the issue of shrinking and aging populations, Dr. Rosa Minhyo Cho argues that Koreans will eventually need to weigh up whether immigration is a viable option to such problems and that efforts need to be made to engage with constructive discourse on the social costs and benefits of multiculturalism in a way that includes ethnic minorities, which is essential to a healthy democracy.

Roughly 2.5 million foreigners are estimated to be residing in South Korea (hereinafter, Korea) as of December, 2019, comprising about 4.9% of its total population. Given its long history of being an ethnically homogenous society, the relatively recent growth in the number of immigrant and foreign populations have led to new challenges.

In 2007, the number of Korea’s foreign resident population reached 1 million for the first time. Faced with pressures from low fertility and a rapidly aging society, the Korean government began to promote multiculturalism as an important political agenda introducing several policy measures to support and encourage the integration of these newcomers. Such state-led efforts resulted in multiculturalism being upheld as an issue of ‘political correctness’ with much less attention paid to the complex implications of immigration in general. As a result, Koreans displayed a naïve form of paternalism toward immigrants at least during the early periods of increased migration.

However, in recent years problems such as intensified job competition, marriage fraud, cultural clashes, and violent crimes have been linked to the presence of immigrants in Korea, making the risks of a multicultural society more visible. This has led to a change in attitude toward immigration reflecting a nuanced perspective in which people acknowledge both the threats and opportunities associated with multiculturalism. To further examine how Korean’s attitude toward multiculturalism and immigration has changed over the past 15 years, data from the South Korean Identity Survey (SKIS: 2005-2020) is analyzed and reported below.

Change in Attitude toward Multiculturalism and Immigrant Receptivity

Generally, exclusionary attitude toward immigrants can be explained by two theoretical perspectives. Social identity theory posits that immigrants are viewed as cultural threats to the positive status of the country’s symbolic establishments as well as to the maintenance of its ethnic and cultural cohesiveness, whereas realistic conflict theory emphasizes strained social relations due to increased competition for limited resources with material threats being the primary concern. To better understand the source of recent decline in the overall support for multiculturalism, it should be important to examine how Korean’s attitude relating to immigrant receptivity has changed over time especially with regard to their perception of immigrants as cultural and material threats.

Based on survey results, it appears that the level of perceived cultural threat has not been increasing over the past 10 years. For example, the proportion of positive responses to the statement “Racial, religious, and cultural diversity enhances national competitiveness” increased consistently from 47.8% in 2010, to 50.4% in 2015, and to 51.8% in 2020. Likewise, the proportion of respondents who agreed that having more immigrants enrich Korea’s culture slightly increased from 33.6% in 2010 to 34.5% in 2020. When asked whether they would allow their child to marry a foreigner, the fraction of positive responses increased from 30.2% in 2005 to 32.5% in 2010, and to 44.3% in 2015 and 2020 indicating a rather open attitude toward marital assimilation.

However, Koreans are found to display a more negative attitude on questions either directly or indirectly related to material threat. Examples of direct material threat include immigrants competing for the same jobs as natives, while indirect material threat may occur due to increased taxes for their welfare or congested public spaces and infrastructure. According to findings from the SKIS, the proportion of people who agreed to the statement that foreign laborers threaten the jobs of natives was 39.4% in 2005 but increased to 42.7% by 2020. Also, the fraction of people who thought that we should provide equal voting rights and social security benefits to naturalized citizens dropped from 56% in 2010 to 52.1% in 2020, while those who thought we should make it easier for foreigners to obtain Korean citizenships dropped from 40.7% in 2010 to 34.2% in 2015, and to 33.6% in 2020. Lastly, the fraction of people who agreed that there are limitations to receiving foreigners with different racial, religious, and cultural backgrounds increased from 48.9% in 2010 to 56.9% in 2015, and to 57.1% in 2020.

Taken together, it appears that the direction of change in attitude toward immigrants is not uniform in Korea, but rather multifaceted. Koreans tend to display growing acceptance and tolerance on issues relating to the cultural benefits of multiculturalism and international marriages, yet their attitudes are becoming more exclusionary on matters that pose real economic threats to natives who have to compete with newcomers for jobs, benefits, and social services.

Difference in Attitude toward Multiculturalism by Education and Age

Generally, attitudes about immigration are closely tied to one’s age and educational attainment. In the case of Korea, findings indicate that preference toward multiculturalism is positively correlated with one’s education level but negatively correlated with age. First, in terms of education, estimates presented in Table 2 show that during the past 10 years, support for multiculturalism has been much higher among people with college education or above than those with middle school education or below. This is not surprising, given that most migrant workers in Korea are unskilled laborers posing direct material threats to the less educated population. Results from cross-tabulations between education level and whether you think foreign laborers threaten the jobs of natives corroborated this finding where the proportion of positive answers was 53.6% for people with middle school education or below but only 35.1% among college educated or above in 2020. 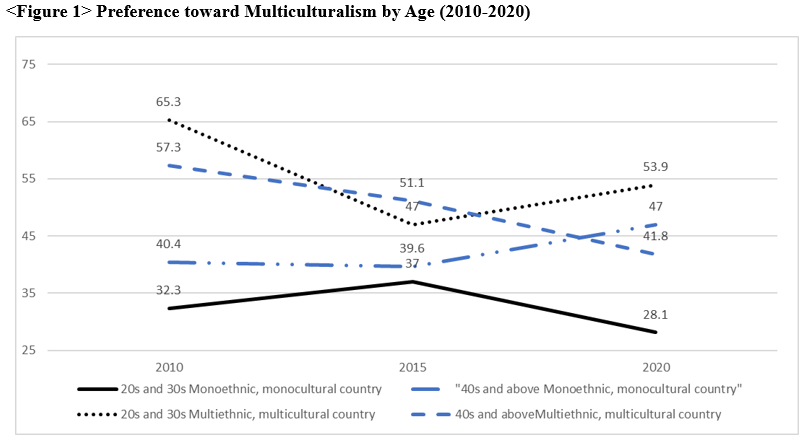 Feelings of Closeness by Immigrant Group

Finally, to better understand the recent change in attitude toward multiculturalism among Koreans, feelings of closeness across various immigrant groups are presented in Figure 2. Prior research indicates that Koreans tend to interact differently with foreigners based on factors such as whether the person is a naturalized citizen, Korean ethnic, legal immigrant, and/or whether the person migrated from an advanced (as opposed to a less developed) country. As shown in all three surveys of 2010, 2015, and 2020, Koreans display the greatest degree of affinity toward children of international couples, followed by North Korean defectors, marriage migrants, Korean-Chinese, and labor migrants. Feelings of closeness tend to be stronger for groups that have family ties with native Koreans and weaker for groups that have the potential to compete for scarce resources. 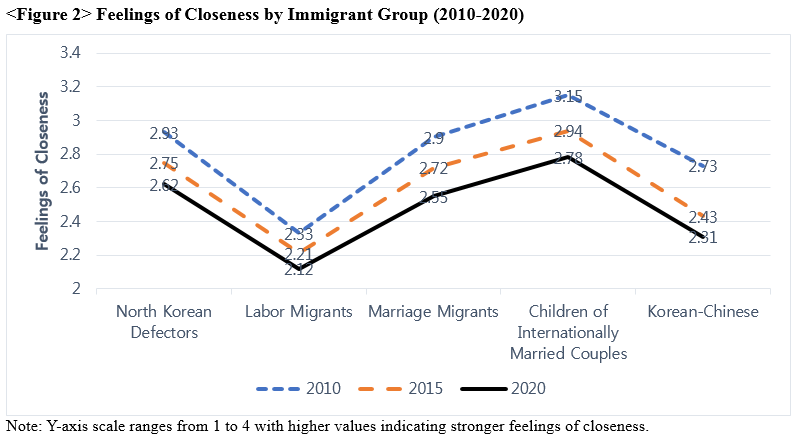 Is Korea experiencing a temporary setback in its transition to becoming a multicultural society where cultural differences and racial diversity is embraced or are these statistics indicative of serious underlying conflicts among members of our society? We do not know yet. Probably the answer to this question will ultimately depend on our future actions.

However, one thing that is clear is that Korea is faced with a future of shrinking and rapidly aging populations even with the current rates of immigration. Currently, the number of non-working age population is expected to exceed that of the working age population by 2056. This means that, over the next decades ahead, we will experience severe fiscal pressures as the workforce declines and the numbers of elderly soar. Eventually, Koreans will have to decide whether immigration is a viable solution to such problems and learn how to attract promising migrants while successfully integrating them. To achieve our end goal, whatever it may be, we should start making efforts to engage in public discourse regarding the social costs and benefits of multiculturalism from a practical and objective perspective. Also, since changing attitudes among Koreans has the risk of exacerbating the economic and political exclusion of ethnic minorities potentially leading to their social exclusion, making sure that ethnic minorities are adequately represented throughout such discourse should be a priority for a healthy democracy. ■

■ This brief is a revised version of the paper, “South Korean’s Multifaceted Attitude toward Multiculturalism” (by Choi, Ji- Hye and Cho, Rosa Minhyo), presented at the Conference on the 2020 South Korean Identity Survey held on July 6, 2020 at the Korean National Assembly Hall.

■ Rosa Minhyo Cho is a professor at the Graduate School of Governance, Sungkyunkwan University (SKKU) in Seoul, Korea. Prior to her appointment at SKKU, she was an assistant professor at Brown University in the Department of Education and Public Policy between 2006 and 2012. Her research interests include evaluating the various effects of social welfare policy, education policy, immigrant policy, and labor policy using large-scale quantitative datasets. Her recent publications include “Collaborative Governance in East Asia” (2020), “Examining the Effects of the Durunuri Programme on Low-wage Workers’ Social Insurance Coverage in South Korea” (2019), and “Exploring the Acculturation Profiles and Adaptation of Children of Multiethnic Families in South Korea” (2016).