How does South Korea position itself amid rising U.S.-China competition in times of COVID-19? In the East Asia Institute (EAI)’s fourth South Korean Identity public opinion survey (May 2020), a general increase in hostile sentiments towards neighboring countries was revealed. Yet despite such developments, South Korea continues to display high affinity toward the U.S., which it views as a potential buffer and safeguard against the threat of rising China. Furthermore, while tensions have heightened between South Korea and the U.S. throughout the Moon and Trump administrations due to disagreements over defense cost sharing and the U.S. pursuit of the "America First” policy, South Korea increasingly desires to strengthen the ROK-U.S. alliance.

As shown in Figure 1, South Koreans’ favorability levels of both the United States and China have decreased while negative sentiments have risen for both countries alike. However, the specific degree to which South Koreans’ sense of hostility has risen differs for the U.S. and China. While negative sentiments toward the U.S. increased by 5.4 percentage points (from 4.8% in 2015 to 10.2% in 2020) it has grown by 24 percentage points for China. In addition, though the level of affinity for the U.S. fell by 17.6 percentage points (from 77.3% in 2015 to 63.7% in 2020), over 60% of the respondents have retained positive feelings towards the U.S. On the other hand, the level of favorability for China has fallen by more than a half, with a 29.6 percentage point decrease (from 50% in 2015 to 20.4% in 2020). As a result, the percentage of hostility toward China has surpassed that of favorability since the 2015 survey. 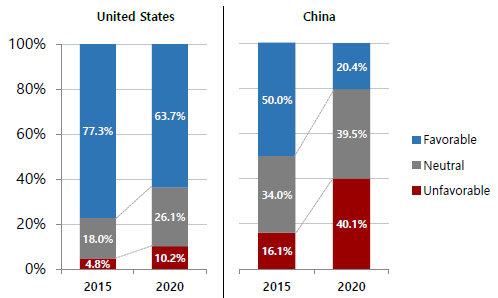 The generational trend reflected in the affinity levels is also important, especially considering the future of South Korea’s bilateral relations with the U.S. and China. In addition to the generally favorable sentiment that South Koreans have of the U.S. and vice versa toward China, there is a large gap in how younger South Koreans see the U.S. and China (Figure 2). According to both the 2015 and 2020 surveys, South Koreans aged 18 to 29 have the most affinity toward the U.S. amongst the five age groups (82.6% in 2015 and 72% in 2020).

Figure 2: South Korean Sentiments toward the U.S. and China, by Age Group (2020) 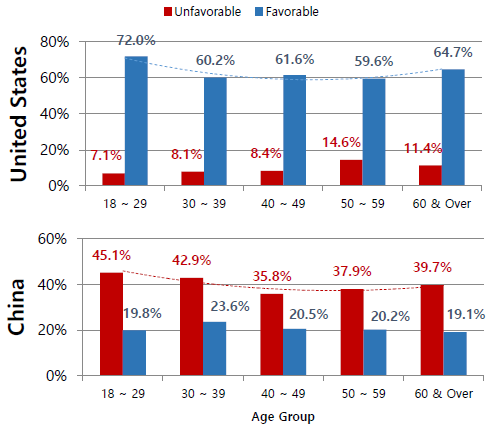 The same group of young South Koreans, however, holds the largest hostility toward China (45.1% in 2020). This upsurge in anti-Chinese sentiment among the younger generation is noteworthy as South Koreans aged 18 to 29 had rated China’s favorability highest amongst the different age groups in the previous 2015 survey (52.7%) (Figure 3). Such an increase in South Korea’s hostile sentiment could be explained by China’s pressure and subsequent economic retaliation against South Korea during the years of 2015-2016 for the issue of deploying THAAD and the outbreak of the Wuhan originated COVID-19 pandemic since February 2020.

United States as a Safeguard against the Threat of Rising China

Figure 4: Top Perceived Threats to South Korea's National Interests for the Next Decade (2020) 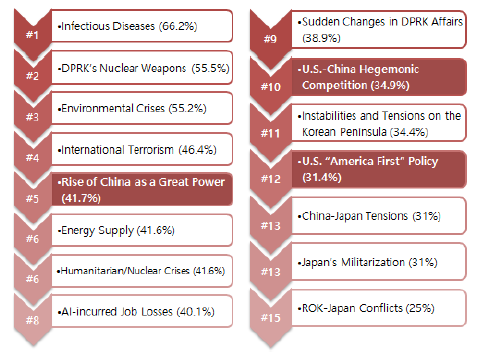 Other than “Infectious Diseases”(66.2%), which surpassed “North Korea’s Nuclear Weapons” as the top national threat for the first time due to the COVID-19 pandemic, “Rise of China” continues to rank among the top five listed risk factors to South Korea’s national interests. In fact, the number of respondents who identified it as either “very threatening” or “somewhat threatening” has increased by 2.7 percentage points since 2015 (from 39% in 2015 to 41.7% in 2020). South Korea’s perception of China as a threat has also been echoed in previous EAI surveys. For example, in the Seventh Korea-Japan Public Opinion Survey conducted in May 2019 (hereafter, the May 2019 survey) administered by both EAI and The Genron NPO, China followed North Korea as the number two country of threat to South Korea. In another EAI survey on the Mid-term Assessment of the Moon Jae-in Administration from November 2019 (hereafter, the November 2019 survey), 66.9% of the respondents also identified China’s rise as a threat rather than as an opportunity (22.6%) for South Korea.

How do South Koreans, then, view the United States in comparison to China? Although 31.4% of the respondents have identified “U.S. ‘America First’ Policy” (a newly added category for the 2020 survey) as a threat (Figure 4), the overall view that South Koreans have of the U.S. is that it is a strategic buffer against China. For example, in the same survey from November 2019, 60.1% of the respondents agreed that the ROK-U.S. alliance helps to protect South Korea from China’s economic and diplomatic pressure compared to 34.5% who disagreed.

South Koreans continue to desire the strengthening of the existing alliance with the United States (Figure 6). Since the Korean Identity survey was first administered in 2005, the percentage of respondents opting for the strengthening of the ROK-U.S. alliance has continuously risen by 14.3 percentage points (from 30.3% in 2005 to 44.6% in 2020). While more South Koreans prefer the pursuit of independent diplomacy in 2020 than in 2015 (from 20.9% in 2015 to 27% in 2020), the gap between the percentage of respondents supporting the bilateral alliance (44.6%) versus independent diplomacy (27%) is still significant by 17.6 percentage points.

Meanwhile, China continues to rank first as the country expected to influence South Korea the most in the next decade among five countries including the U.S., Japan, Russia and North Korea. This could be explained by the economic significance China holds as South Korea's largest trading partner of 162 billion USD, followed by the U.S. at 73 billion USD (World Bank, 2018). In the 2020 survey, South Koreans selected "development as an economic power” as the number one long-term future policy agenda (with 28% of the respondents) among thirteen policies, which emphasizes China's importance as a leading economic partner for South Korea. Similarly, in the May 2019 survey, 83.9% of the respondents selected China as a more important economic partner for South Korea compared to the U.S. (72.6 %).

Despite existing tensions between South Korea and the U.S., the 2020 Korean Identity survey shows that the ROK-U.S. alliance continues to hold significance to South Korea as a safeguard against the threat of rising China. The bilateral alliance between the two countries extends beyond security and economic means, as more than half of the respondents in the November 2019 survey (51%) stated that the alliance is natural given the shared values between the two countries (compared to 33.8% of the respondents who disagreed).

As mentioned in "ROK-US Cooperation in an Era of US-China Strategic Competition” (Lee, 2019), the U.S. needs to take this opportunity to be "prudent and patient” in addressing South Korea even if the domestic public opinion in South Korea remains largely in favor of the U.S. With 31.4% of the respondents identifying the Trump administration's "America First” policy as a national threat, anti-American sentiments will arise and weaken domestic support for the ROK-U.S. alliance if the U.S. demands extensive economic commitments from South Korea toward the alliance and threatens to withdraw the U.S. force from the Korean Peninsula. ■

■ Sook Jong Lee is a Senior Fellow and Trustee at the East Asia Institute and served the Institute as President from 2008 to 2018. She is also a professor of public administration at Sungkyunkwan University. Her recent publications include Transforming Global Governance with Middle Power Diplomacy: South Korea’s Role in the 21st Century (ed. 2016), Keys to Successful Presidency in South Korea (ed. 2013 and 2016), Public Diplomacy and Soft Power in East Asia (eds. 2011).

previous
[Issue Briefing] South Korean Perception of North Korea and Unification: The Future of the Korean Peninsula, Neighbor rather than Brother