[Issue Briefing] South Korean Perception of North Korea and Unification: The Future of the Korean Peninsula, Neighbor rather than Brother

The year of 2020 marks 75 years of division of the Korean Peninsula into two Koreas. It may be a short interlude in terms of Korea’s long-term preceding history as one nation, but this modern history of separation seems to be long enough for South Koreans to perceive North Korea as a separate country different from their own. This issue briefing reviews South Koreans' perception of North Korea and their attitude toward unification of the Korean Peninsula based on the results of the East Asia Institute’s fourth Korean Identity public opinion survey in 2020.

The series of four Korean Identity surveys (2005, 2010, 2015 and 2020) reveal that South Koreans increasingly regard North Korea as a separate country. Since 2005, the proportion of respondents who perceive North Korea as a different country increased by 10.9 percentage points (from 77.7% in 2005 to 90.2% in 2020). In addition, 70.5% of South Korean citizens responded that South Korea is the only legitimate government on the Korean Peninsula.

South Koreans’ negative perception of North Korea has also steadily increased. From the five different options that South Koreans can select as the adequate description of North Korea, the options including “one of us” and “brother” imply a closer perceived connection between the two Koreas, whereas those ranging from “neighbor,” “stranger,” and “enemy” imply that North Korea is a separate entity from South Korea. Since 2005, there has been a continuous decline in the South Koreans’ recognition of North Korea as “one of us” and “brother.” For instance, the number of people who answered “one of us” has declined by more than half from 30.5% in 2005 to 13.9% in 2020. In contrast, people who answered “stranger” or “enemy” have increased significantly from 2005 to 2020 by 8.6 percentage points and 11.1 percentage points respectively. The 2020 survey also saw the largest percentage of South Koreans recognizing North Korea as a “neighbor” for the first time since 2005 with 21.8% (Figure 2).

Cautious and cost-conscious views on unification

The public perception of North Korea as a separate entity is also linked to the domestic perspective of unification of the Korean Peninsula. An increasing number of South Koreans feel that unification is no longer an urgent issue, and even unnecessary for the future of peninsular affairs. For instance, as sown in Figure 4, the proportion of responses to “Unification is very much needed” fell by half from 2005 to 2020 (from 17.4% in 2005 to 8.9% in 2020), while that for the “There is no need to rush unification” option rose by 12.1 percentage points (from 19.6% to 31.7%). An increasing number of respondents also selected the “There is no need for unification” option compared to 2005 (from 7.9% in 2005 to 20.2% in 2020). 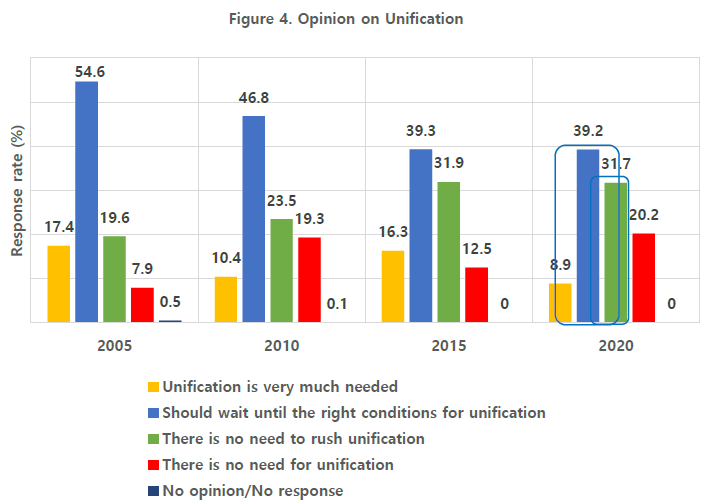 In addition to the continuous decline in the number of South Koreans who feel that unification is necessary, there has also been a transition in the perceived reasons why unification is necessary for South Korea. In 2015, the primary reason for unification was due to the shared ethnic and cultural background between the two Koreas. Responses to the option stating “South Korea and North Korea are one heritage” was at 37.2% and those in support for the “Reunion of separated families” was also at 16.7%. However, the results have taken on a more economic turn in the 2020 survey results. As Figure 5 indicates, the percentage of those who answered “(Unification) can accelerate economic growth” marked its highest at 41.1%, while that for the “South and North are one heritage” declined by 7.7 percentage points since 2015 (from 37.2% in 2015 to 29.5% in 2020). Furthermore, the proportion of responses supporting the “Reunion of separated families” also notably declined by 12.8 percentage points (from 16.7% in 2015 to 3.9% in 2020), while that for “[Unification] decreases the cost coming from division” increased by 2 percentage points (from 9.8% in 2015 to 11.8% in 2020). This phenomenon implies that South Koreans are increasingly placing importance on the economic benefits of unification rather than its value as an integration of heritage or lost kin. 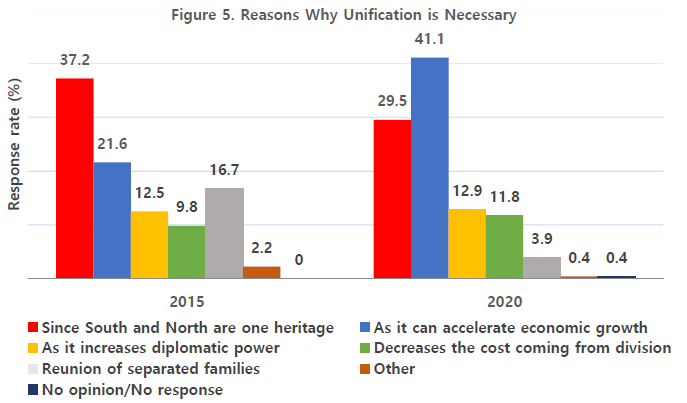 Similarly, less South Koreans are willing to pay for the costs associated with unification. For instance, more than half of the respondents answered that they will not pay at all (53%), followed by those who selected the “less than 50,000 KRW per year” option (21.7%). In addition, those who prefer that the level economic aid to North Korea remain at its status quo was at 56.4% in 2015 and 46.5% in 2020. Only 4.9% believed that South Korea needs to further expand aid to North Korea, marking the lowest percentage since 2005. On the other hand, 17.2% of the respondents selected “We must not provide any economic assistance [to North Korea]” in 2020 marking its peak since 2005.

Two state solutions preferred as a way of unification

South Koreans’ preferred unification method has also changed since the previous Korean Identity survey in 2015. In 2015, more than half of the respondents (52.9%) answered that unification should be achieved under the South Korean system, while the two-state solution was the second preferred method (33%). However, in 2020, “Unification with continued existence of the two systems” (44.9%) reclaimed its place as South Koreans’ most preferred way for unification. The heightened preference toward a two-state system also relates to how more South Koreans view North Korea as a separate entity and “neighbor” rather than “one of us”; an increased number of South Koreans desire to maintain two individual systems of government rather than implement an integrated system of government even if the Korean Peninsula is unified. 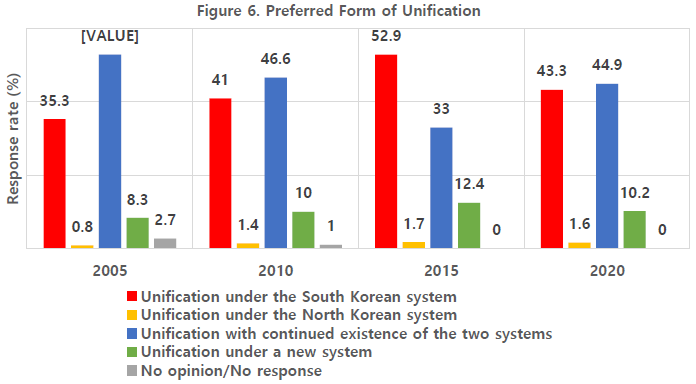 In the case that the two Koreas are unable to resolve existing conflicts by themselves, which country would be of most assistance for establishing peace on the Korean Peninsula? Results from the preceding three Korean Identity surveys from 2010, 2015 and 2020 imply that the United States is the most helpful nation for the future of the Korean Peninsula. As shown in Figure 7, South Koreans prefer United States as the desired country of assistance amongst the U.S., China, Japan and Russia. While support for the U.S. fell by 8.7 percentage points throughout the past five years (from 34.8% in 2015 to 34.8% in 2020), the U.S. has been the only country with a continued two-digit percentage of support. On the other hand, support for China, South Koreans’ second choice, has fallen by nearly a half (from 11.8% in 2015 to 6.3% in 2020). Support for the U.S. is also ten times higher than those for Japan (3.1%) and Russia (3.2%). Overall, the U.S. remains as the most preferred country by South Koreans for helping the unification of the two Koreas. 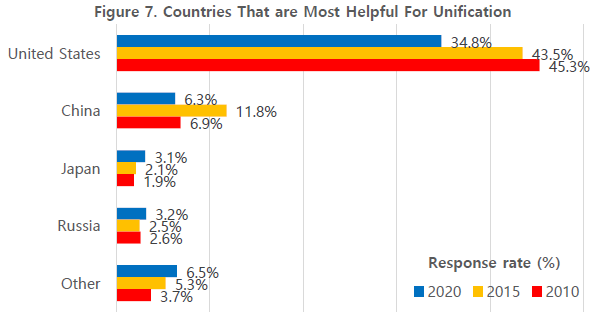 The recent state of affairs also highlight the importance of the U.S. in unification and Korean Peninsula issues. The two Koreas and the United States have held multiple talks and summits, with the most recent one being held at the demilitarized zone (DMZ) on June 30, 2019. In these summits with North Korea, the U.S. continuously acted as a mediator, and its significance is displayed again in Moon’s speech at the EU virtual summit in June 30. At the EU virtual summit, President Moon mentioned that the South Korean government plans on making thorough efforts to allow North Korea and the U.S. to reinitiate dialogues before the U.S. presidential election in November 2020. Moon’s words, combined with the recent flow of political events, show that the role of the U.S. is becoming more important for the reconciliation between the two Koreas.

Considering the results of the 2020 Korean Identity survey, we can see that ethnicity is losing its value as a reason for unification between South Korea and North Korea. This tendency is associated with the rising nationalistic sentiments in South Korea in terms of both politics and the economy. More South Koreans view North Korea as a separate entity—as a neighbor—rather than as a country of. This increasingly nationalistic view is especially visible as the younger generation grows increasingly accustomed to the modernized and affluent South Korea and those in the older generations with first-hand ties to the war and division of the Korean Peninsula gradually decrease in number.

In addition, the positive view of the U.S. as a supporter in unifying two Koreas reveals that the U.S. is has an important role in maintaining peace preceding unification efforts. Although Korea shows its tendency to be independent, the result implies that the role of the U.S. cannot be disregarded. ■

next
[Issue Briefing] South Korean Perception of the United States and China: United States, a More Favorable Partner than China