■ You can visit our ADRN site to view the original text or download the pdf.

COVID-19 has overtaken the international community throughout the first quarter of 2020. It has resulted in hundreds of thousands of deaths and over three million confirmed cases, wreaking havoc on all aspects of society, including the global economy and politics. The countries affected by COVID-19 include those where members of the Asia Democracy Research Network (ADRN) reside. Some of these countries have officially announced lockdowns of cities or the entire country, with economic activities slowing to a near-total halt. As much as COVID-19 has dominated the media, the spread of fake news on the virus has also become a serious problem. Fake news often threatens democracy and can be used for propaganda that misleads people’s political decisions. It also becomes a lethal factor when directly linked with the necessities of life.

Dr. Thawilwadee Bureekul from King Prajadhipok’s Institute explains that Thai people have experienced a fast spread of fake news after the sharp rise in confirmed COVID-19. As a result, people have been convinced to stock up on food and water from the supermarket. She points out that Thai government is providing efforts to control the spread of fake news with their Computer Crimes Act and Anti-Fake New Center. Despite the difficult situation caused by fake news on COVID-19, she argues that the amount of fake news has been decreasing with the decline in COVID-19 cases and the Thai government’s strict enforcement of the anti-fake news law.

With the outbreak of COVID-19, Thailand has found itself confronting a huge challenge that has led to many changes in the way the Thai people live.

The Thai public learned about COVID-19 after the country’s first confirmed case on January 13, 2020.  The number of confirmed cases increased sharply in mid-March, which was attributed to several transmission clusters. The largest of these occurred at a boxing stadium where a big match was held with an audience of more than 10,000 in attendance, and an entertainment area with a lot of restaurants on Sukhumvit road, Soi Thong lor. The number of confirmed cases rose to more than a hundred per day over the following week, and public venues and businesses were ordered to close in Bangkok and several other provinces. A state of emergency was declared on March 26, followed by the imposition of a curfew on April 3, 2020. This was around the time the government stepped up its efforts to cope with the situation. At the same time, many people became nervous and began looking for information about the pandemic.

The Thai government is not just fighting an epidemic. It is fighting an infodemic. Fake news, which is any viral online content that misleads people or damages a country’s image, spread faster and more easily after the sharp rise in cases. As a result, the government has become greatly concerned about the scale of rumors and misinformation that are hampering its response.

When one person finds news about COVID-19, he or she will quickly share it online. Fake news about the coronavirus has mostly centered on the number of cases and what medicines or food are effective against it. One example of fake news that had a negative social impact is a woman who posted a message on her Twitter account saying 40 people in her neighborhood were infected with COVID-19. Another was a forwarded message that stated “A nurse in Siriraj Hospital walked over to me and said that I should start stocking food. The nurse just came from a conference stating that Thailand was going to be shut down. The news will be officially announced next week, they even warned the nurses to prepare food. I have confirmed the information with the hospital. This is inside news, wait until you hear the announcement.” These fake news stories led people to panic and rush to the nearest supermarket to stock up on food and water. Instant noodles, bottled water, vegetable oil, eggs, and ready-to-eat foods sold out in many supermarkets.

To help lower the panic, an academic from Chulalongkorn University with many online followers, Assoc. Prof. Jessada Denduangboripant, issued a warning to netizens about fake news. He stated in a Facebook post that “Fake news about the new coronavirus is still coming out regularly. The voice clip and picture of a middle-aged woman who claimed that Thailand will be shut down next week are not true.”

Many fake news stories used the name of Siriraj Hospital, which is Thailand’s most famous hospital, to make the information seem more trustworthy. Although government officials also told people not to panic over rumors or fake news about COVID-19, such warnings were ineffective at halting the flow of false stories.

How the Thai government is dealing with misinformation and fake news

In Thailand, the Computer Crimes Act makes it a crime to share false information online. It allows the government nearly unfettered authority to restrict free speech, engage in surveillance, conduct warrantless searches of personal data, and undermine freedoms to utilize encryption and anonymity. This law has become the government’s weapon for fighting fake news about the coronavirus. Spreading fake news about COVID-19 has been deemed a violation of the Computer Crimes Act and carries a penalty of five years in prison and a maximum fine of 100,000 baht.

Thailand’s government also established the Anti-Fake News Center to fight the spread of fake news on social media and the internet. The center deals mainly with issues like natural disasters, the economy and finance, health products, and government policy. This center is under the Ministry of Digital Economy and Society and works very hard to tackle fake news. It is the government’s main effort to exert control over a sweeping range of online content. The center is set up like a war room, with monitors in the middle of the room showing charts tracking the latest “fake news” and trending Twitter hashtags. It is staffed with around 30 officers at a time who review online content—gathered through “social listening” tools—on a sweeping range of topics from natural disasters and the economy to health products and illicit goods. The officers also target news about government policies and content that broadly affects peace and order, public morals, and national security.

The enforcement of the law by this center is very effective and has increased awareness of fake news and penalties for violating the law among the public. The media has also supported this effort by disseminating news about the prosecution of the violators.

There were many sources of information about COVID-19 which confused people and caused fake news to spread quickly. To cope with this, the Center for COVID-19 Situation Administration was established to be the single official provider of information about COVID-19. The center is under the direct supervision of the Prime Minister. A medical doctor, Dr. Taweesin Visanuyothin, was appointed as the spokesperson and provides reports on new coronavirus cases, additional deaths and recovered cases at the same time daily which are televised nationwide.

According to the Ministry of Public Health, the COVID-19 situation in Thailand is improving as the number of new cases has declined with no new imported cases due to restrictions on flights to the Kingdom imposed in early April. The COVID-19 mortality rate in Thailand is at 1.7 per cent, which is almost four times lower than the global average, while the recovery rate is at 62.5 per cent.[1] As of the April 21, 2020, Thailand had 2,811 confirmed cases of COVID-19, with 2,108 having recovered and 48 deaths. At the same time, the Thailand Ministry of Public Health announced various measures to counter the spread of the virus including temporarily closing event venues such as sport stadiums, pubs, nightclubs, and cinemas.[2]

Since the government began strictly enforcing the anti-fake news law, the number of fake news stories appears to have decreased. This is because people were cautioned to be sure of the truth of the content before sharing any message with other people. The government is aware that a crucial weapon in the battle against any public crisis is clear, concise information that can be understood by everyone. The effective work of the newly established Center for COVID-19 Situation Administration has ensured that information released by the government about the outbreak of COVID-19 is clear and will ultimately help reduce the spread of fake news. 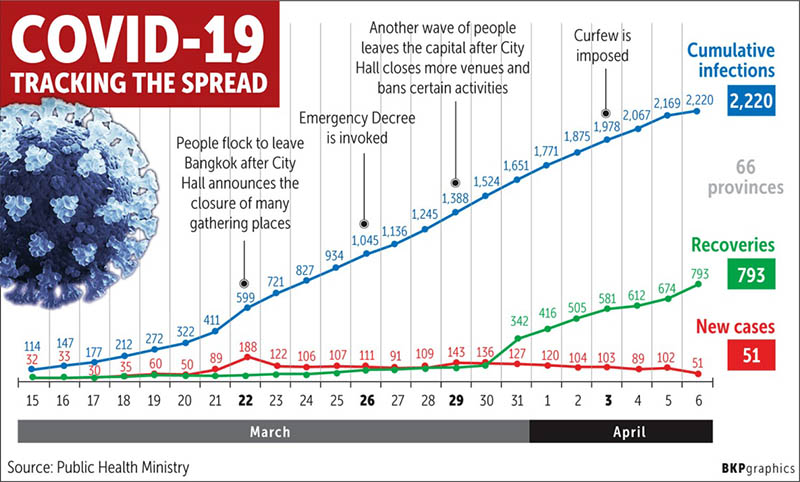 ■ Thawilwadee Bureekul is the Director of the Research and Development Office at King Prajadhipok’s Institute, Thailand. She previously served on the National Reform Steering Committee, the National Reform Council, and the Constitutional Drafting Assembly. Her current academic interests lie in the field of good governance and gender equity, such as participatory and gender responsive budgeting; the preparation of action plans for leadership development and women’s participation in politics and decision-making; and gender-responsive local development planning and budgeting manuals. She has been heavily dedicated to research related to democracy, good governance, social equality, public participation, public policy, and voting behaviors. In 2015, she was the recipient of a prestigious award given to an outstanding woman by the National Council of Women of Thailand. She also succeeded in proposing “Gender Responsive Budgeting” in the Thai Constitution and was accordingly presented with the “Women of the Year 2018” award by the Association for the Promotion of the Status of Women.

next
[EAI Commentary No.1] Assessment and Future Challenges of the U.S.-ROK Summit: From a Policy of Sanctions to a Policy of `Coevolution`