Home Publications Others
Others

#9 EAI Internship, What Lies Ahead! 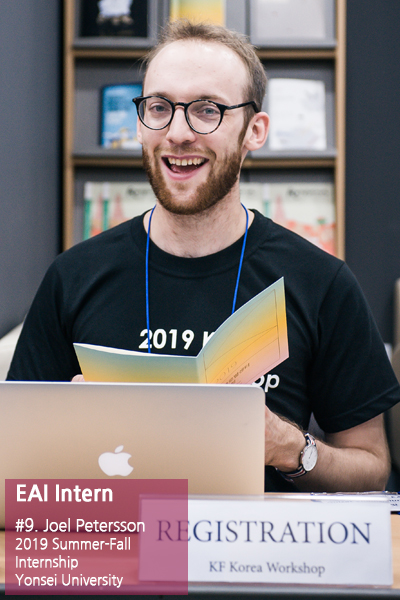 My major is East Asian studies, so from the very beginning it felt very logical to work in a place called East Asia Institute. I was originally most interested in studying about China, but at EAI I got the chance to participate in many projects that covered Asia in a much broader perspective, from North Korea to Myanmar. Through my participation in a project on Korea-Japan relations I felt like I could finally understand better the complicated history of this region.

EAI takes its mission as a think tank seriously, and arranges many lectures, seminars and conferences. Because of this, I unexpectedly became pretty good at organizing events. EAI also helped me become a better and more diligent researcher. EAI staff is good at showing appreciation for the work of interns. Especially during the second part of my internship, when I was the only intern, I felt like I became a part of the team.

I will look back fondly at my almost five months at EAI, where I not only learned so much, but made new friends and connections that will help me for years to come.

previous
#8 EAI Internship, What Lies Ahead!

next
[EAI Roundtable] "The General Election: Nothing Has Changed, Problems Begin Now” Evaluating the Election Results and Forecasting the Future