Even after the end of the Japanese colonial rule in 1945, bilateral relations between South Korea and Japan have been tainted by various unresolved historical issues, including those related to comfort women and victims of forced labor. Amid the series of tit-for-tat aggravating relations with Japan, the East Asia Institute (EAI) asked South Koreans to evaluate their perception of Japan in the 2020 Korean Identity Survey. This issue briefing evaluates the trends in South Koreans’ perception of Japan with the results from the series of four Korean Identity surveys (2005-2020) and those from the previous two Korea-Japan Public Opinion surveys (2018-2019) conducted by EAI. Overall, South Koreans’ perception of Japan in 2020 can be summarized by heightened hostility, low affinity, and the linkage between historical and security issues, especially when addressing the future of the South Korea-United States-Japan trilateral relations.

The 2020 Korean Identity Survey asked 1,000 respondents to score their sentiment toward other countries. The levels of public sentiment were rated from a scale of 0 to 100, with 0 to 49 classifying as hostile (or unfavorable), 50 as neutral, and 51 to 100 as favorable.

When we look at the level of public sentiment, Japan had the lowest average score as the least favorable nation for South Korea. Japan’s scored 30 points on average, which was even lower than that of North Korea (33.3 points). Russia scored 36.2 points, China scored 45.2 points, and the United States scored 62 points respectively. Looking at the evaluation of the United States according to the different generations, the highest score was 64.3 points in the 18 to 29 age group, and the lowest score was 59.6 points in the 50 to 59 age group. As for China, respondents aged 40 to 49 were most favorable with 46.7 points, and those aged 18 to 29 years old were least favorable with 43.1 points. For Japan, lowest points (28.7) were given by respondents aged 60 and over, and those aged 18 to 29 years provided the highest scores averaging 32.1 points, which was also the only score higher than that of North Korea for the same age group (30.9 points). If you look only at the 18 to 29 age group, the highest affinity is for the United States and Japan, and the lowest affinity is for China.

Figure 1. South Koreans’ Favorability toward Other Countries in 2020

Note: The number is average in the 0 (most hostile) to 100 (most favorable) scale.

Threats and Conflict Perceptions toward Japan

The threat perceptions of Japan differed significantly when evaluating the changes in responses from 2010 to 2015, but they were very much stagnant from 2015 to 2020. This variance between 2010 to 2015 and 2015 to 2020 could be explained by the changes in Japan's foreign policy since the inauguration of Japanese Prime Minister Abe Shinzo in 2012. Despite conflicts between South Korea and Japan throughout 2019, the threat perception of “South Korea-Japan Conflict” decreased by 0.5 percentage points from 90% in 2015 to 89.5% in 2020. The risk of “Japan's Pursuit of Military Power” also decreased by 0.8 percentage points from 90.5% to 89.7%. The proportion of respondents who defined “Japan’s Pursuit of Military Power” as “very threatening” as opposed to only “somewhat threatening” also decreased by 0.6 percentage points compared to 2015 (from 31.6% in 2015 to 31% in 2020). While these findings suggest that the threat perception of Japan has not yet peaked even after the escalation of tensions between South Korea and Japan in 2019, the minimal changes in percentage points between 2015 and 2020 also infer that the Japanese threat has remained predominant for South Koreans since it reached its peak in 2015. 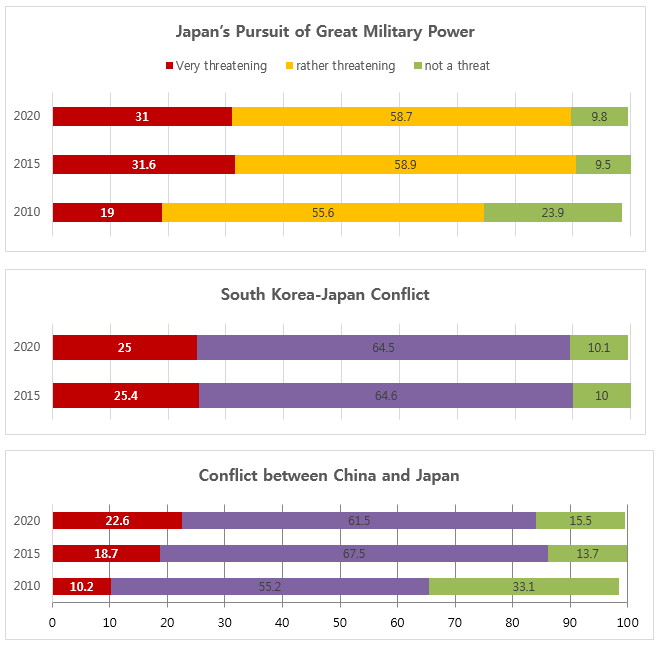 Furthermore, South Korea's perception of “Conflict between China and Japan” as a threat surged in 2015 (from 65.4% in 2010 to 86.2% in 2015). The proportion of respondents who deemed the same factor as “very threatening” also increased in 2020 (from 18.7% in 2015 to 22.6% in 2020). These results show that in addition to the continued threat perception of Japan from 2015 to 2020, there is an added risk perception of China-Japan conflicts. The increased threat perception of China-Japan conflicts indicates that the threat from Japan can arise not only from domestic or bilateral level, but also from a regional level.

Increased Disfavor of Both Japan and China in 2020, but More So of Japan

In the Korea-Japan Public Opinion Survey, which is administered by both EAI and The Genron NPO of Japan annually with 1,000 individuals since 2013, one of the continued questions is "Which country from Japan and China do you feel more affinity towards?" This question was also included in the 2020 Korean Identity survey and the analysis of results from 2018, 2019 and 2020 indicate that South Koreans are feeling increasingly more favorable towards China than Japan.

In the 2018 and 2019 surveys, the responses to “unfavorable of both countries” accumulated to 22% and 24% respectively, which were similar to the responses for both "more favorable of Japan” and "more favorable of China.” However, in the 2020 survey, the number of respondents who did not feel favorable of both Japan and China nearly doubled to 44.5%. As shown by the results of the 2020 survey, South Koreans are displaying heightened exclusivity in their perceptions of China and Japan, which have been marked by increased hostility and threat perception, and a decline in affinity.

In particular, the fall in the level of favorability toward Japan from 17.8% in 2019 to 7% in 2020 explains the rise in the percentage of responses for the "unfavorable of both Japan and China” option (from 22.8% in 2019 to 44.5% in 2020). This decrease in South Koreans’ affinity toward Japan can also be explained by the 2019 South Korea-Japan bilateral conflicts.

The U.S. as a Mediator: A Way to Resolve Past History Conflicts with Japan

The 2020 survey shows that the perception of South Korea-Japan relations is shifting from a bilateral perspective focused on historical issues to a multifaceted relationship encompassing various issues. For instance, throughout the past five years, the South Korean public has shown increased support for resolving the historical problem with Japan in tandem with other issues (61.2%), more than taking separate approaches (38.4%).

The analysis of the 2020 Korean Identity survey results shows that South Korea’s affinity toward Japan has decreased while the level of hostility has increased. Japan’s colonial rule over the Korean Peninsula has been one of the biggest obstacles for the development of South Korea-Japan relations for the past 55 years after diplomatic normalization. In 2019, bilateral tensions peaked due to historical issues related to comfort women and forced labor victims. But the margin of deteriorated opinion against Japan was bigger between 2010 and 2015 than between 2015 and 2020. An added dynamic to South Koreans’ threat perception of Japan in 2020 is increased caution towards China-Japan conflicts. Furthermore, as indicated in the 2020 survey, South Koreans are not in favor of both Japan and China.

Whether the history issues should be dealt separately from economic and security issues has been continuously discussed among experts. However, the Korea public favors a linked solution and supports security cooperation with Japan under the participation of the U.S.

Considering the importance of bilateral relations between Korea and Japan, it is time for leaders of both countries to make efforts to ameliorate the relationship by focusing on common grounds of national interest and devising an effective public diplomacy to each other. ■

■ Seunghee Oh  is the executive director and a principal researcher of EAI. Her research focuses on the Japanese foreign policy and Sino-Japanese relations. Her recent publications include Postwar Japan-China Relations, 1949-2019 (2019), Japan’s Struggle for Recognition and Sino-Japanese Diplomatic Normalization: A Recognitive Approach to the One-China Principle (2017).