The 1987 democratization finally granted South Koreans press freedom. More than thirty years have passed thereafter, allowing the Korean news media for plenty of time to mature. South Korea has become a country best known for its high-speed Internet and smartphones. Besides, the rapid growth of one-person media has been regarded as an expansion of free speech. Unarguably, there seems no shortage of the free press in South Korea.

As news portals account for a large portion of news circulation in South Korea, the number of news organizations has skyrocketed. If a news source is included in portals’ search result pages, it can lure a fair volume of traffic online. As a result, more than six thousand registered news outlets are currently in operation in the country with a population of just over 50 million. With respect to press freedom, South Korea seems to have become a country that everyone had envisioned prior to the 1987 democratization.

Despite the increased press freedom, the South Korean public have become highly discontent with news media in the country. According to the Digital News Report 2020 published by the Reuters Institute for the Study of Journalism[1], South Korea ranked in the last place in terms of media trust for the five consecutive years since 2016. Only 21% of South Koreans “trusted news media they used”, whereas the global average was approximately 46%.

In a similar vein, according to the 2016 Kantar Public poll, more South Koreans expressed their trust in Samsung than they did in all the major news outlets. Quite surprisingly, even the self-identified conservatives and liberals expressed slightly a higher level of trust in Samsung than they did in conservative and liberal newspapers. Clearly, few South Koreans acknowledge news media as a watchdog of society. After enjoying thirsty years of freedom, the status of South Korean news media as the fourth estate has become more of a self-congratulatory gesture. 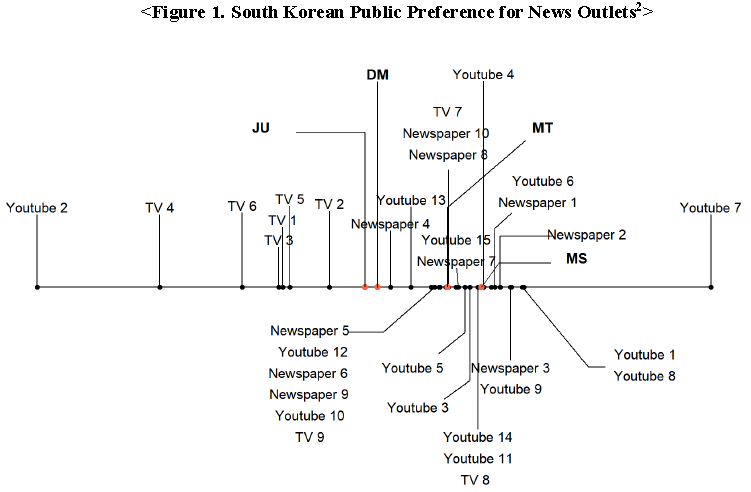 Respondents’ trust in news outlets was measured on a five-point scale, based on so-called Polytomous Item Response Model. This type of model is often used to estimate an examinee’s scholastic aptitude in standardized tests such as SAT or TOFLE. In an academic testing, it allows for estimating the difficulty of each question and juxtaposing it with the ability of examinees on the same scale. Based on this model, respondents and news outlets were placed on the same scale. News organizations received a score based on how likely the same respondents rate them as “trustworthy.”

According to the 2020 Korean Identity Survey conducted above, South Koreans were sharply divided in their news source preference. Of 34 news outlets, only nine fell in between the average supporters of the ruling Democratic Party (DP) and the opposition Unified Future Party (UFP)[3].  This shows that liberals and conservatives alike do not trust the news outlets belonging to the opposite political camp.

In sharp contrast, twelve out of fifteen Youtube channels were located right for the preference of average UFP supporters. Many Youtube channels seemed to appeal to conservative news consumers. Unlike in Europe or the U.S., government’s influence on publicly funded broadcast networks seems quite pervasive in South Korea. After a transition from one government to another, top executives at major broadcast networks such as KBS and MBC are forced to resign. Likewise, nearly everyone holding important editorial positions in news production is forced out and replaced with those on the ‘winning’ side.

Disapproving the publicly-funded broadcast networks, critics of the incumbent government seem to have turned to social media. Likewise, when Twitter first penetrated into the South Korean society in the early 2010s under the Lee Myung-bak government, a disproportionately large number of liberals used it to access political news. Now, with President Moon Jae-in in office, many conservatives seem to have turned to Youtube channels for political news. In short, news from broadcast networks is largely consumed by supporters of the incumbent government, whereas a large proportion of Youtube news consumers consist of supporters of the opposition party.

It is well-known that South Korean news consumers are strongly inclined to avoid news professing disagreeable views. According to the Digital News Report 2020, 44% of South Korean news consumers said that they preferred the news outlets sharing their political views. Among 40 countries included in the study, the average was approximately 28%. Only Turkey (55%), Mexico (48%), and the Philippines (46%) came ahead of South Korea. On the other hand, over 70% of British, German and Japanese news consumers preferred “neutral” news outlets, whereas only 4% of Koreans did.

In conclusion, preference for news sources has become a social identity in South Korea, reinforcing the existing political polarization among the South Korean public. Thirty years after the democratization, South Koreans seem to be caught in a vicious cycle of polarization with the news media facilitating it.■

[2] Editor’s Note: JU refers to Justice Party; DM refers to Democratic Party of Korea (ruling party); MT refers to People Power Party(main opposition), and MS refers to the Livelihood of the People Party. Due to the sensitivity around political orientations of each news outlets, names of each news outlets have not been disclosed in the figure above.

■ Hahn, Kyu Sup is currently a Professor at the Department of Communication at Seoul National University. He received his Ph.D. in communication at Stanford University, and previously taught at UCLA. His areas of research are mainly political communication. His publications include “Economic and Cultural Drivers of Support for Immigrants.” (2019), “The Influence of “Social Viewing” on Televised Debate Viewers’ Political Judgment”, amongst others.