Since democratization, South Korean party politics has been featured by increasing party polarization and incomplete party sorting. In this issue briefing, Prof. Jung Kim examines several factors that have led to party polarization and incomplete party sorting in the country’s politics. Prof. Kim argues that under the two-and-a-half party system, political representation has been unequal, as it over-represents progressive and conservative voters while under-representing centrists, thereby increasing polarization between progressive and conservative parties. At the same time, Prof. Kim argues that the number of centrist voters who do not fall under the ideological distributions of the major parties remains significant, which indicates that party polarization has not been corresponding with party sorting, leaving centrist voters in drift.

This essay seeks to illustrate party politics in South Korea that has unfolded since its democratic transition that took place in 1987. For starters, it argues that South Korea’s party system has brought about an asymmetric structure of political representation that over-represents progressive and conservative voters while under-representing centrist voters. It also claims that unequal political representation has engendered party polarization in South Korean politics. It further argues that party sorting has been incomplete whereby parties have difficulty shaping political issues in a partisan way to exploit their electoral advantages. Increasing party polarization and incomplete party sorting capture the evolving nature of party politics in South Korea since its democratic transition.

For South Korea’s centrist voters, no such continuity of partisan brand has been established from United People’s Party (1992-1995) to United Liberal Democrats (1995-2006), Creative Korea Party (2007-2012), People’s Party (2016-2018), and Bareun Party (2017-2018), simply because these parties were not successor parties one another.  Consequently, centrist voters have found themselves in a situation in which their efforts to attach partisan loyalty to centrist parties are destined to be interrupted. The National Assembly members are selected by the majoritarian mixed-member electoral system consisting of 85% of seats from single-member districts and 15% from proportional representation lists, which institutionally favors two larger parties at the cost of smaller parties. Under such a ‘winner-take-all’ systemic pressure, centrist voters, which consist of more than 40% of the electorate, according to a recent opinion survey, tend to abstain or to be compelled to cast their ballots for one of the larger parties in order not to waste their votes. Centrist voters with the weak partisan attachment are less likely to have strong incentive to engage in political life. In fact, a study shows that voters with strong partisan identities are more likely to vote than voters with weak partisan identities during recent presidential elections in South Korea.

In sum, South Korea’s two-and-a-half party system has brought about an asymmetric political representation, in which voters with strong partisanship tend to be over-represented, while voters with weak partisanship tend to be under-represented. This is why political scientist Jang Jip Choi claims that the “greatest cleavage in contemporary Korean politics is between a representation system with no social foundation and the nonvoters who resist and cannot gain representation through that system.”

The asymmetric structure of political representation, in which progressive and conservative voters are more actively involved in politics in general and elections in particular than centrist voters are, has made electoral strategies of two large parties depart from the median voter theorem and resort to strategic extremism. To put it differently, the two large parties are more likely to rely on ‘mobilization’ to push for voters with strong partisan identities who will vote for them to go to the polls rather than ‘persuasion’ to convince voters with weak partisan identities who are more predisposed against, but not adamantly opposed to, them to change their opinion. Once the two parties decide to abjure ‘persuasion’ and to embrace ‘mobilization’ as their dominant electoral strategy, then party polarization would kick in. Figure 1 demonstrates this logic of party polarization with the disappearing centrists. 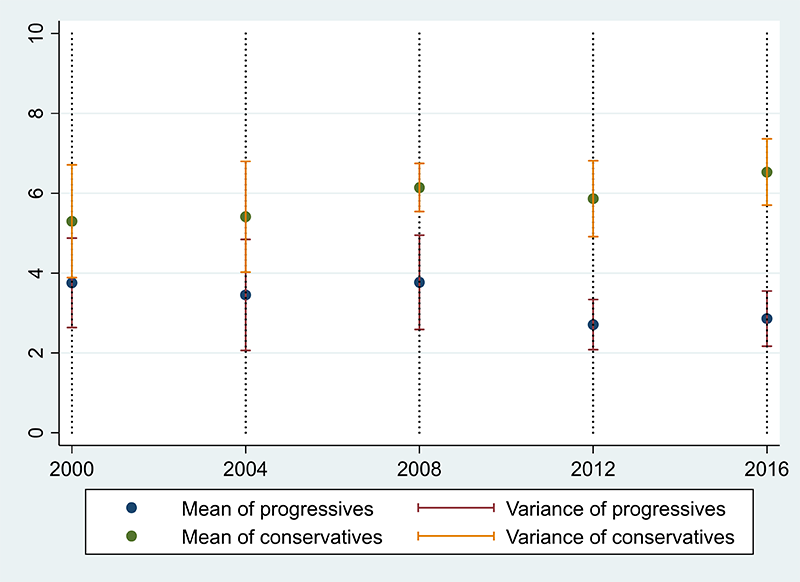 Figure 1 represents ideological means and variances of the National Assembly members from progressive and conservative parties from 2000 to 2016. The distance of ideological means between the two parties has clearly inclined from 1.54 in 2000 to 1.96 in 2004, 2.37 in 2008, 3.15 in 2012, and 3.67 in 2016. The average ideological variances that represent the degree of partisan coherence of each party has steadily declined from 1.12 in 2000 to 0.69 in 2016 for progressives and from 1.41 in 2000 to 0.83 in 2016 for conservatives. It is important to note that there were overlapping areas between progressive and conservative parties in the 2000s, in which bipartisan cooperation was expected. Such overlapping areas to expect bipartisan cooperation no longer existed in the 2010s, which indicates that party polarization deepened and widened with increasing intra-party homogeneity and inter-party heterogeneity. In other words, it implies that centrist legislators have disappeared in the National Assembly of South Korea.

To complete the picture of South Korea’s party politics, it is essential to note that party polarization resulted from the misalignment of representation between politicians and voters. In other words, as ideological distributions of parties have continuously lost correspondence to those of voters over time, progressive and conservative parties have become more distant from each other, leaving the voice of centrist voters unheard. Figure 2 illustrates that such representation misalignment captures part of South Korea’s party politics. 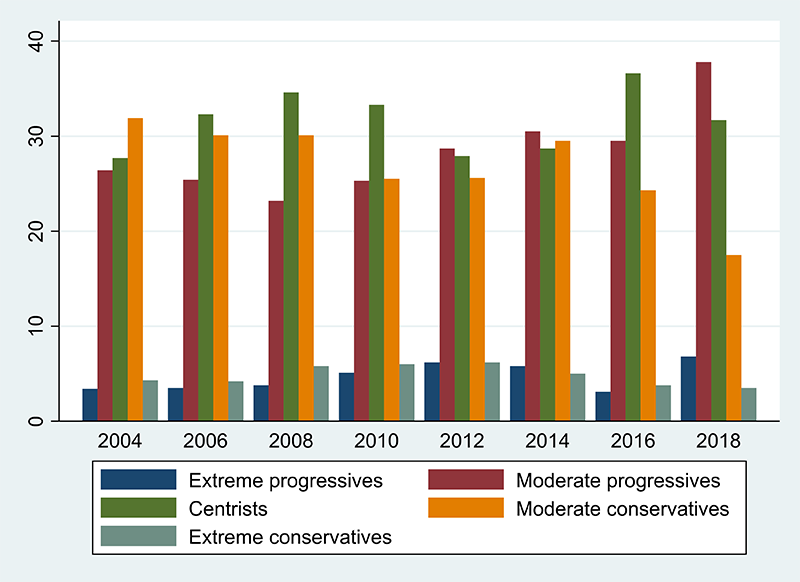 The finding that the ‘unimodal’ ideological distribution of voters has been at odds with the ‘bimodal’ ideological distribution of parties strongly suggests that party sorting has been incomplete in the country in the sense that centrifugal forces emanated from party polarization are not strong enough to bring about the corresponding party sorting. To simply put, while the two large parties might have become more polarized in the political marketplace, they have not succeeded in polarizing the electorate at large. Compared with the United States where voters’ social identities grow increasingly party-linked and parties become more influential in political decision-making due to escalating party polarization and party sorting, the effect of partisanship on policymaking is less pronounced, which makes voters more open to alternative policy ideas in South Korea.

■ Jung Kim is currently an Assistant Professor at the University of North Korean Studies, South Korea. He teaches courses on International Relations in East Asia and Political Economy of the Two Koreas, among others. Prior to this, from 2009-2015, he was a Lecturer at the Underwood International College and Graduate School of International Studies at Yonsei University. During this time, Mr. Kim was also a Chief Researcher at The East Asia Institute. He pursued his Bachelors and Masters in Political Science at Korea University and went on the pursue his Ph.D. at Yale University. His research interests include Comparative Politics and International Relations in East Asia.